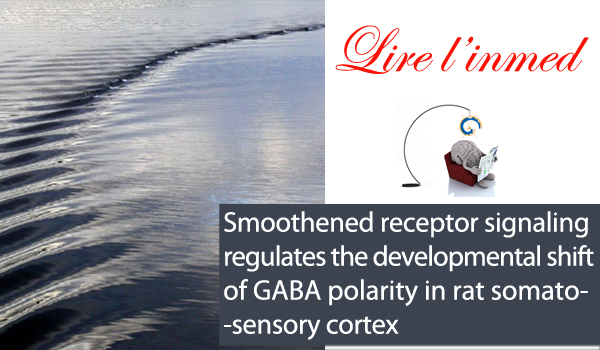 Smoothing things out. The transporters KCC2 initiate the polarity shift of GABAergic transmission and the maturation of inhibitory circuits. Here, the authors unveil an interaction between KCC2 and “smoothened” or SMO, the transducer in the receptor complex of the developmental protein Shh. Too much or too little of SMO action will have mirror effects on KCC2 stability at the neuron membrane, the polarity shift timing, the density of GABA synapses and ultimately on the newborn susceptibility to myoclonic seizures. SMO or the middle ground policy.

Scientific abstract: Sonic Hedgehog (Shh) and its patched-smoothened receptor complex control a variety of functions in the developing central nervous system such as neural cell proliferation and differentiation. Recently, Shh signaling components have been found to be expressed at the synaptic level in the postnatal brain, suggesting a potential role in the regulation of synaptic transmission. Using in utero electroporation of constitutively active and negative-phenotype forms of the Shh signal transducer smoothened (Smo), we studied the role of Smo signaling in the development and maturation of GABAergic transmission in the somatosensory cortex. Our results show that enhancing Smo activity during development accelerates the shift from depolarizing to hyperpolarizing GABA in dependence on functional expression of potassium-chloride cotransporter type 2 (KCC2). On the other hand, blocking Smo activity maintains GABA response in a depolarizing state in mature cortical neurons resulting in altered chloride homeostasis and increased seizure susceptibility. This study reveals an unexpected function of Smo signaling on the regulation of chloride homeostasis through the control of KCC2 cell surface stability and on the timing of the GABA inhibitory/excitatory shift in brain maturation.

Published in Journal of Cell Science, 2020