Manage your pace, this is a race! 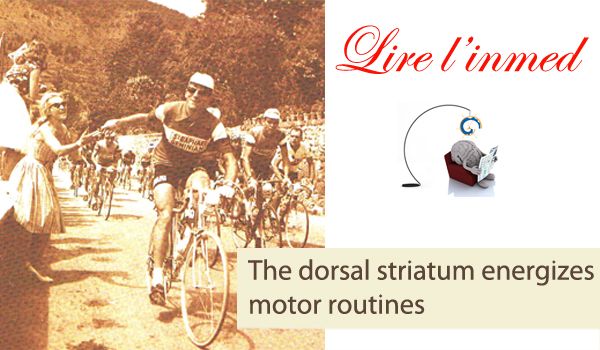 Manage your pace, this is a race! In this study, rats are tested in a task in which they must wait for a specific time before reaching for a reward located at the front of a motorized treadmill. The most common strategy of rats is to wait while being carried away from the reward by the treadmill and then to produce a brief but rapid run toward it. Here, the authors show that rats with lesions in dorsal striatum wait less and run at a lower speed, even though they are able to run fast in other circumstances. Using an optimal control model, the authors find that these reductions in speed and waiting are compatible with an increased sensitivity to effort. Thus, the dorsal striatum may indirectly influence the speed and timing of our actions by controlling how much energy we are willing to spend.

Scientific abstract: The dorsal striatum (dS) has been implicated in storing procedural memories and controlling movement kinematics. Since procedural memories are expressed through movements, the exact nature of the dS function has proven difficult to delineate. Here, we challenged rats in complementary locomotion-based tasks designed to alleviate this confound. Surprisingly, dS lesions did not impair the rats’ ability to remember the procedure for the successful completion of motor routines. However, the speed and initiation of the reward-oriented phase of the routines were irreversibly altered by the dS lesion. Further behavioral analyses, combined with modeling in the optimal control framework, indicated that these kinematic alterations were well explained by an increased sensitivity to effort. Our work provides evidence supporting a primary role of the dS in modulating the kinematics of reward-oriented actions, a function that may be related to the optimization of the energetic costs of moving.