The winner takes it all 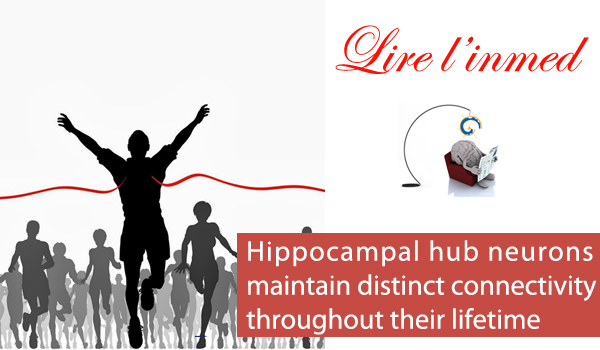 The winner takes it all. The group had previously shown that GABAergic neurons that were positioned in the hippocampus the earliest had distinct properties, making them some kind of hubs in the neural information flows of developing networks. Here, they show these early born neurons retain distinctive properties into adulthood, such as high connectivity rate for local but also distant targets, suggesting enduring outstanding functions.

Scientific abstract: The temporal embryonic origins of cortical GABA neurons are critical for their specialization. In the neonatal hippocampus, GABA cells born the earliest (ebGABAs) operate as ‘hubs’ by orchestrating population synchrony. However, their adult fate remains largely unknown. To fill this gap, we have examined CA1 ebGABAs using a combination of electrophysiology, neurochemical analysis, optogenetic connectivity mapping as well as ex vivo and in vivo calcium imaging. We show that CA1 ebGABAs not only operate as hubs during development, but also maintain distinct morpho-physiological and connectivity profiles, including a bias for long-range targets and local excitatory inputs. In vivo, ebGABAs are activated during locomotion, correlate with CA1 cell assemblies and display high functional connectivity. Hence, ebGABAs are specified from birth to ensure unique functions throughout their lifetime. In the adult brain, this may take the form of a long-range hub role through the coordination of cell assemblies across distant regions.