It all starts with a good model 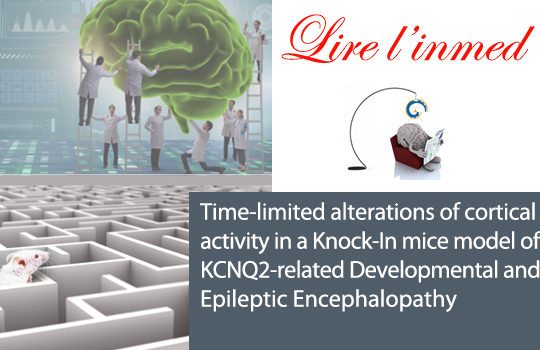 It all starts with a good model… The authors show that mice expressing the kv7.2 potassium channel with a mutation found in patients have important hallmarks of developmental and epileptic encephalopathy: transient abnormal excitability of cortical cells and spontaneous seizures before the juvenile stage, during brain development. This fits clinical observations on patients, aged of 1 or less. This model could help designing an effective therapy and investigating the link between these short alterations and the terribly sad, enduring, neurological deficits children are suffering. (I. Bureau)

Scientific abstract: De novo missense variants in the KCNQ2 gene encoding the Kv7.2 subunit of voltage-gated potassium Kv7/M channels are the main cause of developmental and epileptic encephalopathy with neonatal onset. Although seizures usually resolve during development, cognitive/motor deficits persist. To gain a better understanding of the cellular mechanisms underlying network dysfunction and their progression over time, we investigated in vivo, using local field potential recordings of freely moving animals, and ex vivo in layers II/III and V of motor cortical slices, using patch-clamp recordings, the electrophysiological properties of pyramidal cells from a heterozygous knock-in mouse model carrying the Kv7.2 p.T274M pathogenic variant during neonatal, postweaning and juvenile developmental stages. We found that knock-in mice displayed spontaneous seizures preferentially at postweaning rather than at juvenile stages. At the cellular level, the variant led to a reduction in M current density/conductance and to neuronal hyper-excitability. These alterations were observed during the neonatal period in pyramidal cells of layers II/III and during the postweaning stage in pyramidal cells of layer V. Moreover, there was an increase in the frequency of spontaneous network-driven events mediated by GABA receptors, suggesting that the excitability of interneurons was also increased. However, all these alterations were no longer observed in layers II/III and V of juvenile mice. Thus, our data indicate that the action of the variant is regulated developmentally. This raises the possibility that the age-related seizure remission observed in KCNQ2-related developmental and epileptic encephalopathy patients results from a time-limited alteration of Kv7 channel activity and neuronal excitability.

published in Journal of Physiology, 2022

en vous inscrivant à notre newsletter
This site is registered on wpml.org as a development site.