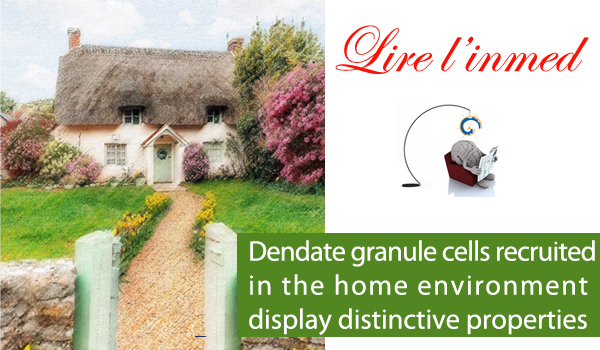 Home-sweet-home. One knew already about the existence of Jennisfer Aniston’s neurons, the ones that activate at the picture, the voice or the name of the star. Here the authors show that a few neurons in the hippocampus are activated when mice are in a familiar environment, their «home». These neurons although they were at some point activated, are rather hypo-excitable due to a quiet but persistent shunting inhibition. This makes sense: nothing’s like a resting day at home!          (by Ingrid Bureau)

Scientific abstract: The dentate granule cells (DGCs) play a crucial role in learning and memory. Many studies have described the role and physiological properties of these sparsely active neurons using different behavioral contexts. However, the morpho-functional features of DGCs recruited in mice maintained in their home cage (without training), considered as a baseline condition, have not yet been established. Using fosGFP transgenic mice, we observed ex vivo that DGCs recruited in animals maintained in the home cage condition are mature neurons that display a longer dendritic tree and lower excitability compared with non-activated cells. The higher GABAA receptor-mediated shunting inhibition contributes to the lower excitability of DGCs activated in the home environment by shifting the input resistance towards lower values. Remarkably, that shunting inhibition is neither observed in non-activated DGCs nor in DGCs activated during training in virtual reality. In short, our results suggest that strong shunting inhibition and reduced excitability could constitute a distinctive neural signature of mature DGCs recruited in the context of the home environment..

Published in Frontiers in Cellular Neuroscience, 2021

en vous inscrivant à notre newsletter
This site is registered on wpml.org as a development site.